Things are moving quickly. While writing my previous story, I had the opportunity to talk to someone involved with the carrier in question. Before I have even had a chance to start writing on that discussion, the SL Sailing Association in-world group erupted.

Sailors are staging a protest in the Blake Sea, in the vicinity of the carrier. The following photos just in: 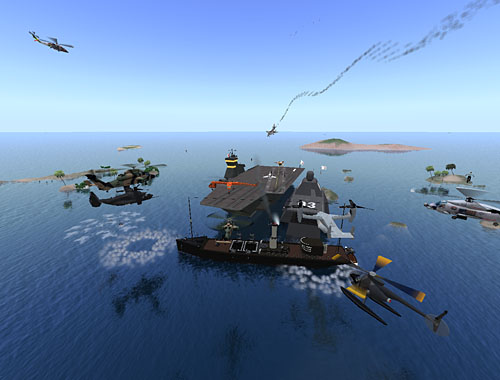 Sailors mount a protest against the warships in the Blake Sea.

Sailors in passive protest at military operations in the Blake Sea. 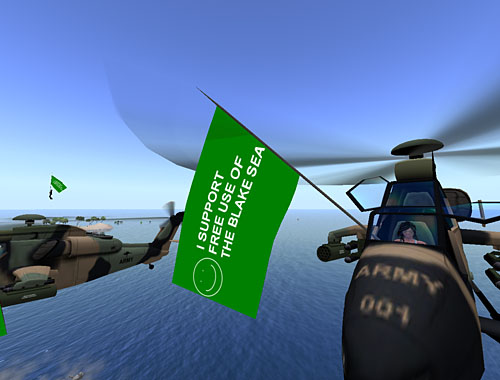 More as it comes in.

War In The Blake Sea

You may have seen them already if you have sailed in the Blake Sea recently. The aircraft carriers, the warships, the low-flying attack aircraft. Let me clarify that a little: the permanently stationed aircraft carriers and warships.

There were misgivings some time ago when four Blake Sea sims were set to public rez to allow the pirate community to stage its sea battles. In the end, it turned out that the pirates were a responsible community who scheduled their events sympathetically with the sailing community (facilitated by a shared calendar). If anything, the impact on recreational and racing sailors has been minimal. As a regular sailor in the Blake Sea, this reporter has rarely encountered a pirate battle in progress.

This has all changed. Now, we have WWII or other recent-era warships on what seems like permanent station in the Contested Waters sims. Not only that, but a fifth Blake Sea sim (Hawser) has been made public rez specifically for these warships to use. 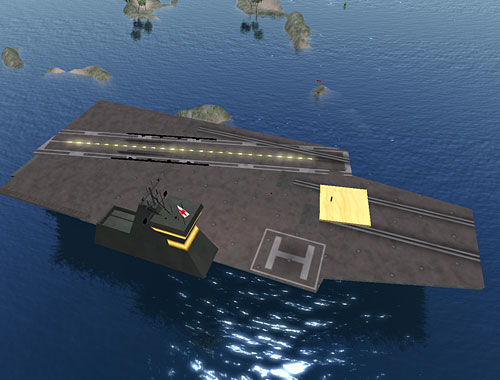 At first, some thought this was a misconfiguration by LL. However, following his recent announcement, it appears that this was arranged by MarkTwain White. The story goes that the pirates were starting to complain about the modern battle craft taking over the Contested Waters, so Hawser was made public rez temporarily as a way to move the modern craft away. It also seems that White gave permission for at least one warship to be permanently set up in Hawser, even when there is no actual combat in progress.

Also in White’s announcement was the proposal to LL, by “some of the USS leadership” that four sims in the south west corner of the Blake Sea be dedicated to WWII and modern era battles. Already, they have moved into this area – before a decision has been provided by LL. Currently, as I write, there is a carrier stationed in Kraken. It has been there for several hours.

The vessel is pretty big (and, I have to say, not very well made – it is very poorly proportioned, being far too wide for its length). I took a closer look and found that it is nearly 100m long and about 40m wide.

It so happened that the forward end of the vessel was over the rez zone in the north east corner of the sim, so I took the opportunity to rez a prim and resize it to 10m by 10m. The next photo shows an overhead view of the vessel with this prim in place, and gives a better idea of its size. The small dark object left of centre of the 10m prim is my avatar.

What we want to know is, where have the Blake Sea Steering Committee (a community group specifically set up to represent sailing interests in the Blake Sea) and the local sailing clubs been while this was developing? Were they consulted?